The serious dangers of loneliness have long been known, but the cellular mechanisms by which loneliness causes adverse health outcomes have not been well understood. Now, a team of researchers has released a study shedding new light on how loneliness triggers physiological responses that can ultimately make us sick . For further reading

The Social Inclusion, Hope and Recovery Project (SHARP) is hosting An Open Group Exhibition/Installation for the festive period. Including work from staff, service users and carers.  Come along to our private view on Monday 7th December from 5-8pm

The Salome Gallery is community exhibition space that is also used as a meeting and workshop room. It exhibits work from all artists, self-taught or professionally trained, support artists, many with lived experience of mental illness, to show their work, many for the first time, showing the work of staff, carers and service users. The gallery hosts a range of events including private views, workshops and Artists Talks, celebrating and embracing the talent and skills of many using our service users, and to date has exhibited the work of over 120 artists locally in group and solo shows

The National Collaborating Centre for Mental Health (NCCMH) are seeking applications from service users and carers to assist in the development of the ‘Achieving Better Access to Crisis Care Services’ project. The project aims to cover 5 main topic areas:

The purpose of this research is to gain an understanding of how children and young people understand and manage their own mood if they have at least one parent experiencing mood changes. The information may help find out what sort of support young people think they’d benefit from if they are worried about their own mood experiences. Do you:

The principal researcher is Graham Simpson – Adkins who can be contacted on 07852 518 411 or simpson1@exchange.lancs.ac.uk. Young people who participate will be invited to take part in a raffle. The prize will be a choice of a £50 amazon or iTunes voucher.

This secluded Buddhist kingdom uses a unique barometer to measure economic progress. And the message of the 2015 Gross National Happiness Index is a troubling one: Money isn’t buying enough contentment. Tucked high in the Himalayas between India and China, Bhutan was poor and largely closed to foreigners when its fourth king declared, in the 1970s, that “gross national happiness” was more important than gross domestic product, or GDP.

So Bhutan’s happiness surveyors think it’s worth asking a few questions. Among them:

“How much do you trust your neighbours?” “Is lying justifiable?” “Do you feel like a stranger in your family?”   The index also surveys knowledge of artisan skills such as embroidery, carpentry and papermaking.

If “we are increasing in richness but we’re not doing so well overall in well-being, and people are not as content, then something definitely is wrong,” Prime Minister Tshering Tobgay said in this serene capital, 7,700 feet above sea level.

Bhutan, population 750,000, still feels like a place out of time. Traditional architecture and dress prevail: Men wear knee-length robes, tied at the waist, with over-the-calf socks. An early-morning prayer session is among the state-run television network’s most popular programs. The fourth monarch’s pronouncements about national happiness were only pronouncements until 2010, when Bhutan computed its first happiness index. By then, he had abdicated the Golden Throne and his son and successor, Jigme Khesar Namgyel Wangchuck, presided over the country’s transition to a parliamentary democracy.

In the meantime, his philosophy inspired others around the globe. In 2008, France’s then-president, Nicolas Sarkozy, commissioned an influential study of alternative gauges of economic welfare. The U.K. started a “Measuring National Well-Being” program in 2010, and U.S. cities like Santa Monica, Calif., have followed suit. The U.N. just released its third World Happiness Report, created in response to a 2011 proposal by Bhutan.  Yet none of those efforts to measure national morale are quite like Bhutan’s. For Further reading

Around half of suicides by women while pregnant or after giving birth could be prevented by better standards of care, experts have said.  The Confidential Enquiry into Maternal Deaths, based at the University of Oxford and partially funded by NHS England, found that women who suffer serious mental health problems during or after pregnancy are being let down by a lack of resources and failures to spot warning signs.

The researchers examined all 101 suicides by women in the UK and Ireland during pregnancy or up to one year after the end of pregnancy between 2009 and 2013 inclusive. They discovered that only 15% had contact with specialist perinatal mental health services despite the fact that half of the women who killed themselves had previously suffered from depressive illness.

Professor Marian Knight, who led the study, said: “With improvements in care we can prevent about half of the suicides in the future. The main issue for me is women had symptoms for a long time and would present themselves at different parts of the health service. They might present to A&E, they might present to a GP, so there were lots of opportunities … where if someone had recognised the symptoms that would have allowed the woman, if it was available, to get the specialist perinatal care she needed.” Guardian:Tuesday 8 December 2015

‘Future in Mind’ was published in March, providing a framework for tackle on different issues. Government has committed £1.4 billion over the next 5 years to transform children’s mental health services and each local area is developing a plan. 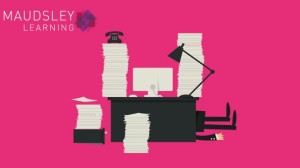 3rd annual a conference for HR and wellbeing practitioners 28th January 2016 Maudsley Learning is set to host the Mental Health Matters conference The programme has been built around employee wellbeing in the workplace, building resilience in employees and understanding the role technology can play in the area. The conference will feature Professor Dame Carol Black, an expert advisor to the Department of Health, and expert speakers from a range of organisations including Metlife, BP, IBM, KPMG and King’s College London. link: http://www.maudsleylearning.com/events/events/why-mental-health-matters-2016/